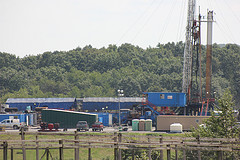 For the last few years, I have been closely watching the development of natural gas drilling in New York State and the development of regulations governing its drilling. For the second consecutive year I attended the Marcellus Shale Coalition (MSC) Annual Conference held in Philadelphia, Pennsylvania. I was and am particularly interested in any change or development in drilling regulations in New York State by the DEC. I don’t feel that any status changes or developments related to this will occur until sometime before the 2014 gubernatorial election. I’ve come to this assumption after talking to an industry PR person who indicated our governor does not have the political will to release the moratorium.

The conference was attended by 2,400 or so individuals that are very excited about the economical miracle shale development has been and shall be for the next 25-50 years.  This year’s talk was about low priced gas (hovering around 3.50 MMBTUs), the lack of pipelines and compressor stations (much “midstream” buildout is planned for 2014), and how many idle wells there are in PA (6800 wells have been completed, of which 2800 are capped awaiting pipelines or price increase or both).  Options remain to increase demand such as: export terminals, ethane crackers, construction of gas fired power plants, conversion of over the road vehicles to natural gas as a fuel source, and Natural Gas Liquids processing plants – all of these represent development of downstream demand.  Industry speakers called for quick regulatory approvals of over 20 large demand increasing pending projects in PA alone.

Another key concern expressed over and over again during the lecture sessions was the issue of drilling the production of waste water and the water balance: What to do with all the produced and flow back water? The individual who figures out the most cost effective solution will introduce great savings for the industry.  Currently flow back and produced water is being trucked in and out of drilling and producing well locations huge costs.

I am excited about seeing a fundamental shift in our energy economy – coal is being phased out of domestic use in favor of cleaner burning natural gas, many more natural gas fueled vehicles are being developed, fueling infrastructure to support those vehicles is being built, chemical plants utilizing natural gas and natural gas liquids as feedstock are being constructed, power plants are converting from coal to natural gas, and new gas fired power plants are being built.  There are lots of shifts and lots of work for those who position themselves to take advantage of the evolving market.  Walden Associates is positioned to take full advantage of this shift with services we provide to a growing list of clients.  A JP Morgan energy analyst who spoke on the economics of drilling indicated that energy companies working primarily in the Marcellus are turning the greatest ROI, and the Marcellus Shale is the most profitable gas play. Why you might ask? Because it is closest to the northeast markets compared to other shale plays.

From a New York standpoint, I fear that all the major pipeline projects will bypass New York and thus, New York will miss out on major pipeline tax revenues.  Might this also diminish the incentive of energy companies to ever drill in NY until all the wells in PA that can be drilled are drilled?

As I have stated in the blog in the past:

As far as futures – JP Morgan analysts suggested Marcellus wells could still be profitable at $2.50/MMBTUs – the bottom of the market.  With so many idle wells I doubt for a long time prices will go up much beyond $4.00/MMBTUs.  As demand develops, supply will follow whether it is in New York or not.  I for one, would prefer it also be in New York.