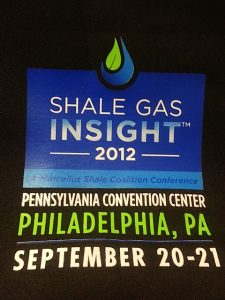 Thursday September 20th I attended the Marcellus Shale Coalition (MSC) conference at the newly expanded Philadelphia convention center. The event began at 6:30 am with conference registration and breakfast and as I arrived I felt a buzz in the air. By 8am the keynote speaker, Pennsylvania state governor Tom Corbett, spoke to more than 1000 attendees who represented a cross section of the shale gas drilling and service world (energy companies, midstream companies, consultants like myself, service providers, landman and representatives of foreign governments (China oil and gas representatives looking for help in their gas plays) etc.).

After this speaker Ted Koppel took the stage and interviewed energy policy representatives for both President Obama and Governor Romney who spoke of Shale gas and it integral part of America energy independence from foreign imports. As I heard them speak I thought to myself how backward my own home state is toward energy independence and shale gas drilling in general – what about all the jobs it could create, the industrial investment and cheap CNG vehicles it could fuel. I thought how far behind the investment curve will New York get. The lost drilling, pipeline building and power plant conversion – how long can we wait. Shale gas in not an unconventional experimental technique anymore but rather accepted and firmly rooted in our national energy future.

Governor Corbett stated that 1,000 horizontal wells have been drilled in his state since 2007 and they expect by 2030 up to 100,000 more will be drilled.  It does not sound like scary stuff anymore it sounds widely accepted. New York State get on board.

I learned that MSC has formed a corporative agreement with PADER by which it has set up an EQuIS Database format and electronic data deliverable format to accept energy company pre-drilling/Pre-lease groundwater water quality sampling data and make water quality available to the public to add transparency. In this way data shared thru MSC database portal will directly exported to PADER and support both pubic access and permit application requirements. I spoke with several energy companies who are not on board with this data sharing system based on concerns about widely available information to the public.  Walden use of EDMS systems (a combination of EQuIS coupled with input and output tools) for clients and has dealt with these issues and Walden have overcome these concerns by limiting free access to data thru data base controls.

The pace of the conference was much like the pace of the Shale Gas Drilling it self efficient and fast moving.  In one session I attended the topic was state regulations.  Ohio had had a moratorium on deep UIC well injection of flowback water but plans to have new regulations finalized in 90 days – wow is that possible for states regulators to work that quickly – well in Ohio yes in New York – no.

I listened to  David Lincoln of Element Partners who spoke of investment opportunities that his private equity firm has made in shale gas support companies both midstream and downstream.  He mentioned TAS energy a privately held company which is improving gas fired power plant efficiency by adding refrigeration units on influent cooling water and he mentioned 212 Resources which is a company working on flowback water treatment systems to distill highly concentrated brine steams.  Both of these companies are growing at triple digit annual rates, growth driven by shale gas development and processing.

I spoke with a representative of Green Field Energy Services who make high-pressure truck mounted water pump systems powered by natural gas used in hydraulic fracturing work.  Green Field runs a shop in Weatherford Texas and employs a staff of 200, building these pumps with back orders 6 months deep.  Will they build a second plant in New York or PA? All these jobs were created for both local and national companies involved in shale gas drilling.  When will this come to New York?  If Ohio can turn around regulation development in 90 days why has it taken New York over three years or is it four? When leadership set a direction then what follows is change/progress.  Right now New York, like our country, lacks leadership and as a result we will form a committee and restudy the effect – come on New York we can do better.