Walden Project Engineer Darren Ikin recently had an experience worth sharing during some field work. Here is his story:

“While growing up in Australia, it was common to see lots of wildlife and the interaction between urban areas and the local flora and fauna.  This is probably what drew me to study Environmental Engineering in the first place.  I had a memorable experience a few years back, when I stepped on a baby snake with no shoes on while putting the garbage outside one night.  As soon as I felt it under my foot, I realized I’d been bitten – which was fair enough, from the snake’s point of view.  After a moment of panic, I caught the snake for identification and waited out the next few hours to see how things would turn out.  Lucky for me, the snake wasn’t too poisonous.

So, I shouldn’t have been surprised at my good fortune when I recently 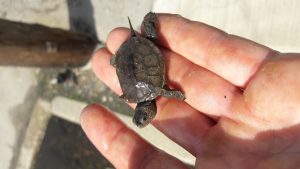 stumbled upon a baby Diamondback Terrapin turtle lost and on the street while I was working on a stormwater drainage project on the South Shore of Long Island, evaluating an area that frequently floods.  During my site inspection, I looked down and saw a baby turtle swimming around in a small puddle of water.  While very happy that I found him, I wasn’t sure what to do.  As I am not a local, I didn’t know what species it was and whether it could be released in salt water.  I phoned a fellow staff member who told me it was safe to put it back into the water nearby.

After poking my head over the end of the road, it was clear the local birds and ducks on the sand were enjoying their day in the sun and would relish an easy meal.  No, that was not the place to let him go.  I drove around to a quieter, more protected area and then carried him down to the water and cradled him in my hand one last time.  He really had a good look at his surroundings before swimming away.  You don’t get many second chances in his world; he didn’t want to mess it up.

The Diamondback Terrapin was once a very common species on the eastern coast and has a range from Massachusetts to Florida.  It was almost hunted to extinction and is now classified as Near Threatened by the International Union for Conversation of Nature (IUCN) due to decreasing numbers. 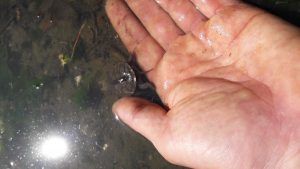 As you might imagine, its main threat is the encroachment of humans on coastal areas and sand bars/dunes where nesting sites occur.  We all like to enjoy the water and all the recreational opportunities it provides, thus it is important that our development lends a balanced approach so that we can co-exist.

The New York State Department of Environmental Conservation (NYS DEC) recently released an information page to warn people to beware of wandering turtles while driving, now that they are on the move looking for nesting sites.  So, if you happen to stumble across any little guys like this that have lost their way, be sure to give them their second chance.”

Refer to Walden’s services page to see how we can help you with a wide variety of environmental projects, and call us at (516) 624-7200 to discuss your project needs.