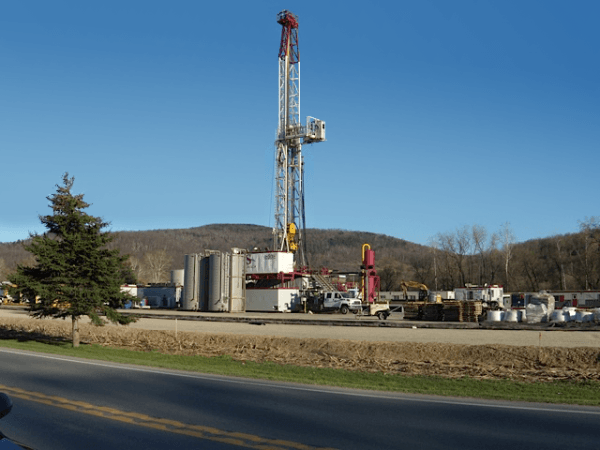 The Marcellus Shale is in the news again as NY State Governor Andrew Cuomo announced his support for natural gas drilling in upstate Counties subject to local approvals by municipalities (NY Times June 13, 2012). The New York State Department of Environmental Conservation (DEC) released a document calledRevised Draft SGEIS on the Oil, Gas and Solution Mining Regulatory Program (September 2011) SGEIS which sets forth the standards of care and regulation of Marcellus Shale gas exploration and development.

Marcellus Shale wells are several thousand feet deep and can be drilled at angles or even horizontal by directional drilling technology. This enables a gas well to intercept a maximum length of gas-producing rock, greatly increasing gas production per well. Gas production id further increased by “hydrofracing” which involves pumping a liquid-sand slurry into the well at very high pressure to open tiny rock fractures. These fractured remain open due to the sand grains that are pumped in during the process.

Opponents of gas drilling and particularly hydrofracing to increase gas extraction from directionally drilled wells are concerned that water resources, especially groundwater, may be contaminated by wastewater used in the drilling and hydrofracing operations. Much of the opposition comes from parts of NY State, such as Long Island that would not be affected by gas drilling and development, whereas impoverished upstate areas look to this as a potential boon to land values, job creation and cheap energy. Recent studies by the USEPA and others indicate that gas development using horizontally-drilled and hydrofraced wells can be done safely without risk to surface water or groundwater supplies. Containing, recycling and treatment of wastewater must be properly managed and proposed regulations would require strict regulatory compliance.

The electric power industry right in New York State, is faced with many aged, inefficient coal fired plants that are scheduled to be de-commissioned in the face of stricter air regulations, and there is a pent-up demand for natural gas supplies for new plants and repowering of old plants.

Walden has been investigating and pursuing the Marcellus Shale gas development initiative to assist energy companies in all aspects of environmental investigation and compliance with a broad range of regulatory-mandated programs. These programs include site selection, stormwater, spill control, wastewater containment, treatment, environmental impact assessment (traffic, wetlands, habitat preservation, etc.). The firm is committed to support development of this resource in New York and other states while applying the needed professional expertise to prevent environmental degradation as feared by the opponents.  Walden believes drilling can be done safely and protective the Waters of the State of New York, it is time to act.

The status of Marcellus Shale gas development in New York has been virtually stalled by slow approval of regulatory guidelines, “red-lining” of areas controlled by some communities and by the New York City watershed, and possibly most of all by the depressed natural gas prices. Walden is confident that pent-up demand will catch up with the means of production and that Marcellus Shale gas will bring new prosperity and energy alternatives to New York.  Mr. Governor its time to act – approve Shale Gas drilling, even limited Shale gas drilling in New York State now!!