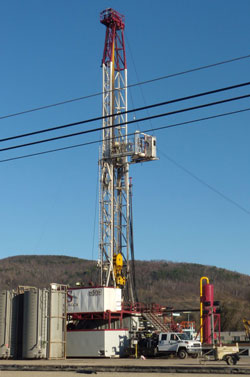 I recently attended a New York State GIS User conference in Oswego, NY run by the Southern Tier Users Group. I was interested in gauging support for High Volume Hydrofracking (HVHF) among the members, and to see if anyone was presenting GIS topics on this divisive subject. I also wanted to see if anyone was using Environmental Database Management Systems (EDMS).

EDMS will be very useful when the NYSDEC shale gas drillingregulations become final, because energy companies will use EDMS to store and analyze soil and groundwater conditions within their planned drilling areas. This is regularly done in neighboring Pennsylvania and surely will be done in New York when Governor Cuomo reestablishes his pro-industry/energy stance and directs NYSDEC to finalize its extensive Generic Environmental Impact Statement (GEIS) on HVHF.

HVHF is a polarizing topic in the press with 78% of media coverage focusing on the supposed negative environmental impact.  People in the industry understand how to drill for shale gas utilizing horizontal drilling coupled with HVHF to tap into deep shale reserves in the least environmentally impactful way. I think many people misunderstand what specific aspect of HVHF is environmentally impactful, which is the handling and processing of the flowback water.  NYSDEC has been studying the problems associated with careless handling of flowback water drawing on examples in other states, and NYSDEC has written its draft regulation to mandate proper management of these waters.  For example, NYSDEC will require all flowback water and process water to be contained on the drilling pad and within steel tanks, which is a large step up from open unlined lagoons as is done in some states, or even lined lagoons as is done in Pennsylvania.

While at the GIS meeting, which took place within the target area of potential Marcellus Shale drilling New York State, attendees I spoke with represented a cross-section of the professionals who could assist with shale gas drilling, and were very much in support of getting the drilling going.  I began wondering what political reason is delaying the Governor from moving forward with establishing NYSDEC regulations.  When will the failing economic recovery, and the potential for the economy to slide back into recession, mean enough to the Governor to take the bold step and authorize the DEC to approve the HVHF regulations?  Will it have to wait until the Governor draws all the political capital from the opposition?  My guess is yes, as this issue has clearly become more political than economic and what is good for New York State.  I too am waiting with the other professionals on the sideline when I want to get into the game and help revive New York’s economy.  I am ready and willing to work with energy companies to wade through the proposed HVHF regulations, and I set an engineering challenge to prepare the permit for New York State’s first Marcellus Shale gas production well.

Governor Cuomo, do right by working New Yorkers and direct the NYSDEC to release its well designed regulation now.