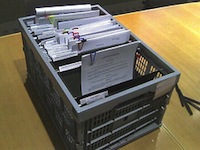 An underground storage tank can be used to contain any number of products. But if those products are considered potentially dangerous to people or the environment, your tank and its contents are regulated by the government.

The federal Environmental Protection Agency has a set of rules you need to follow if you’re storing and using petroleum products or certain chemicals that are considered hazardous substances. In New York, your underground storage tank is officially regulated by the New York State Department of Environmental Conservation (DEC), through their Petroleum Bulk Storage program.

New Jersey and every other state has a similar agency, and often municipalities have specific requirements you have to follow, as well.

The DEC requires you to maintain five types of ongoing documentation regarding your underground storage tank.

Each day, you have to measure the contents, record the amount pumped out and any amount of fuel delivered, then calculate the daily change. You’re also required to calculate the change monthly. You can measure manually, although you probably have a metering system that can provide this data automatically.

If your daily calculations don’t add up, something is amiss. You have to note that, and of course if it’s significant or persistent you’ll be asked to investigate and correct the problem. It would be prudent to do this on your own, sooner rather than later, to head off more serious compliance problems later on. Or the far more costly risk of remediating contamination.

Underground storage tanks must have double-wall construction or have another type of secondary containment in place. You can use a dip stick to detect moisture or vapor, but, again, your automated electronic system should be monitoring the interstitial space.

Steel tanks and associated piping have to be externally protected to reduce the possibility of corrosion, usually by incorporating another “sacrificial” metal that serves as an anode so it will corrode instead of your important components. You have to visually inspect this system.

Both tanks and pipes can be the source of an environmental release, so both have to be monitored. You aren’t just looking for significant, obvious leaks but for more insidious releases such as vapors in the soil or groundwater surrounding your tanks system.

Electronic monitoring can do much more for you than just make reporting easier and faster. Because it’s a continuous process, it can alert you immediately if any type of release is detected. Rather than waiting a week or a month to learn of a problem, you can identify the exact source and take corrective action right away.

There are other records you must keep on file, too.

When a DEC inspector visits, they’ll want to see more than just the five documents noted above. You’ll also need to show them proof of when your underground storage tank was  installed, what construction materials it’s made of, how you use it now and how the tank has been used historically.

In addition, the inspector will check to be sure you’ve properly labeled every underground storage tank, fitting and the related piping. Each must be permanently marked with the American Petroleum Institute’s official color and symbol designation for whatever product is contained inside.

If you’re unsure whether you’re properly following regulations for your underground storage tank, it’s a good idea to meet with a professional environmental engineering consultant to discuss your situation. They can review your monitoring program and give you recommendations for improvements, and they can perform soil, surface water and groundwater tests to ensure your system really is safe and clean.