On March 1st, 2018, the New York State Department of Environmental Conservation issued an Enforcement Discretion Letter which relaxes certain provisions of the new Part 360 solid waste rules. This letter supersedes listed portions of Parts 360 and 361 of the regulations until May 3rd, 2019 or until the current edited rule is amended, whichever comes first. The letter only touches on a few parts of the new Part 360/361 regulation, so all other aspects of the rule are still in effect under the current regulations, including the requirements for new Permits.

The letter only deals with the following two parts of the Part 360/361 regulations:

The letter explains that any facility that deals with only cement, concrete or asphalt (separately, not a combination of all three) and receives 100% pure material does not need a permit. If any concrete, asphalt, or rock is received and considered recognizably uncontaminated, then that material does not fall under the Part 360/361 regulations and does not need to be handled by a permitted facility. If the material is not deemed recognizably uncontaminated, or contains soil or mixed material, it must be received by a permitted or registered facility, depending on the composition of the material. 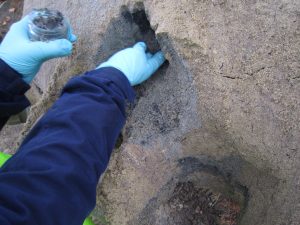 The current Part 361-5 regulation requires sampling of fill material or residue leaving a C&D facility for reuse at the rate of 1 sample every 1,000 cubic yards before the material is allowed to leave the site. According to the March 1st letter, the NYSDEC will delay the enforcement of this sampling requirement until further notice.

Now that this long-awaited letter has been released by the NYSDEC, it is time for facilities to move forward with the next steps to comply with these regulations so you don’t fall behind in the process. Nothing in the Enforcement Letter eliminates the need to obtain a Permit for processing materials not mentioned in the letter, including Soil and Mixed Material. As no further changes of significance to the new Part 360 rules are anticipated, NOW is the time to start the permitting process, as illustrated in the graphic below. 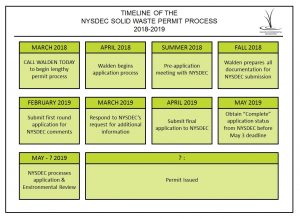 Applying for and obtaining a Part 360 Permit under the new rule will not be a simple or straightforward process, so applicants cannot wait to file until the deadline is looming. It is vital that you start the Permitting process ASAP to ensure that your Part 360 application is complete by the May 3, 2019 deadline to avoid enforcement actions and penalties.