Worries Of Groundwater Contamination Due To Fracking Spreads Across America 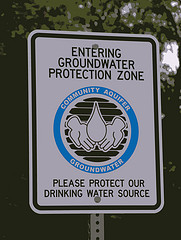 Residents and business owners across the country are reveling in the decreasing price of natural gas. But that’s coming at a different sort of cost – increasing concern after soil investigations are showing groundwater contamination produced by the hydraulic fracturing, or fracking, process used to extract natural gas from shale deposits far below the earth’s surface.

Beyond groundwater contamination, many people are also worried about damage to environmentally sensitive habitat from drilling itself, heavy truck traffic and chemical spills or leaks around storage tanks.

It’s a “catch-22” type conundrum that seems to pit two extremely important natural resources against one another. And it’s a controversy that’s heating up as oil and gas producers, landowners and other nearby water users seek to better understand the science of the situation.

We need both water and natural gas.

About half the nation’s population gets their drinking water from groundwater, underscoring the critical importance of assuring fracking contaminants aren’t allowed to pollute this vital resource. But how do we balance that with the fact that natural gas now accounts for a quarter of our nation’s total energy consumption? In an attempt to meet that demand, production has increased by nearly a third since 2005.

Nine states have reported contamination of surface, ground and/or drinking water they believe is a result of fracking.

Although drilling companies tend to be wary of divulging the exact contents of their fracking fluid, ostensibly for proprietary reasons, well-site samples have shown presence of such chemicals as formaldehyde, acetic acid, citric acid and boric acid that are associated with fracking. A few drilling companies have even been discovered using illegal diesel fuel in their fracking fluid.

The fracking process uses millions of gallons of fresh water, rendering it toxic. Half is stored in above ground tanks and used later to fill underground waste wells deep below the surface, but the rest remains largely unaccounted for, presumably capable of migrating to cause further groundwater contamination.

The latest study sheds a little more light on this complicated subject.

Just this past June, DukeUniversity published findings from a study conducted on drinking water wells near Pennsylvania Marcellus shale drilling operations. The study included wells in the Alluvium, Catskill and Lock Haven aquifers as well as the Genesee Formation inOtsego County,New York.

The results, published in the Proceedings of the National Academy of Sciences, showed methane present in 82% of drinking water wells within a kilometer of fracking wells. There were also significant concentrations of ethane and propane as well as hydrocarbon and helium isotopes, all of which are associated with fracking. The study did not find any diesel or other industrial fluids.

Duke’s scientific team says faulty or inadequate steel casings and imperfections in cement sealings were the two most likely culprits in the drinking water contamination. They say their results should actually allay some concerns about fracking, because notably fewer wells were found to be contaminated compared to an earlier study. But they say the methane found is definitely caused by fracking, not naturally-occurring leaks from local shale.

It may come down to where you are.

The same team of scientists from Duke studied drinking water wells near fracking sites in Arkansas and found absolutely no signs of contamination. The State of Wyoming is currently conducting their own study, the results of which will be made public in September, 2014.

Meanwhile, states are responding to contamination findings around Marcellus shale sites by stepping up regulation. In Pennsylvania, more than 1400 environmental violations have been handed out for fracking-related practices, with the number of citations issued up by a third just between 2010 and 2011.