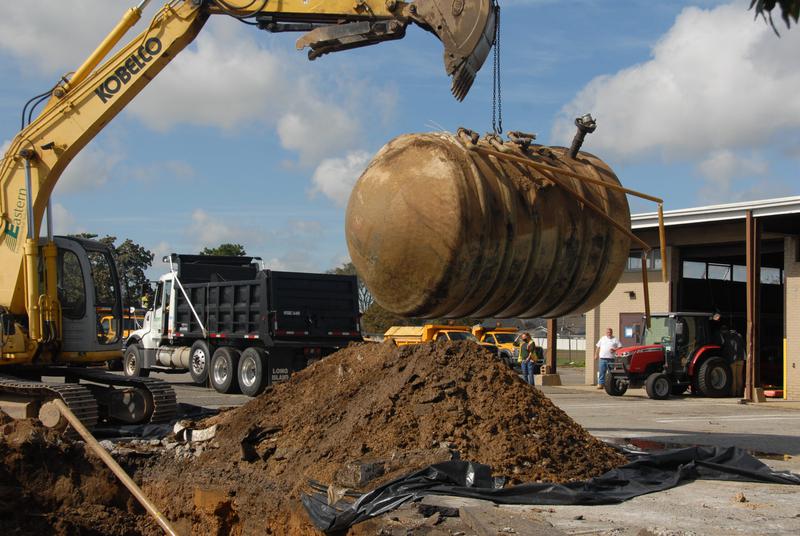 Walden Environmental Engineering recently completed a project for the Town of Hempstead, Department of Parks & Recreation. The work, which took place at Market Lane Garage (“Site”), called for the removal of an old gasoline underground storage tank (“UST”) in preparation for the installation of new storage tanks.

Following Nassau County regulations, underground fuel tanks have a 30-year lifespan. After that time, they must be removed and replaced.

The removal of the singular gasoline UST is immediately being followed with the installation of two new USTs and a new dispensing system. The new tanks have a capacity of 4,000 gallons, as did the tank that was removed. One of the tanks will contain regular fuel, the other diesel fuel.

The entire operation to remove the tank took two days. The spot where the tank was removed was restored with material from the excavation. However, clean, sand meeting structural backfilling requirements was brought in to make up the deficit in the material.

For both the removal and the installation, Walden is performing environmental quality control and construction management at the Site. An example of one of Walden’s responsibilities during the removal was collecting “endpoint” soil samples from the outer extents of the excavation and reporting if there was any existing damage on the tank (which may signal a potential reportable spill). The endpoint samples were analyzed by the Town’s contract laboratory for VOCs (volatile organic compounds) and SVOCs (semi-volatile organic compounds).

Walden is also responsible for compiling and filing reports for the Town, summarizing each phase of the work and to certify closure of the tank that was removed, and also those to be installed.

Walden has worked with The Town of Hempstead on several projects and continues to build on that successful partnership using the core facets of our culture–collaboration, respect, and teamwork, as guiding principles.

Walden, on behalf of the Parks department, received competitive bids for this removal replacement project, and based on current market conditions, bids came in 30% below engineers estimate and within the Town’s job budget. Based on this fact, Walden believes market conditions are conducive for municipalities to bid work now to save valuable financial resources and spur economic activity.

Give us a call today at (516) 624-7200 to discuss how we can help with your next tank removal or installation project.