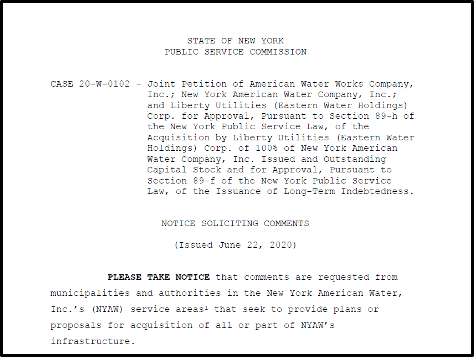 The PSC has received many requests to replace the current providers of water service with a municipal owner and operator.  The Commission is tasked with determining if the transfer to another private owner of utilities would be in the public interest – which includes considering viable potential alternatives such as municipalization.  This consideration of alternatives is why the Commission is seeking comments.  Specifically, the PSC is asking interested agencies (among other things):

In addition, the PSC is also challenging the private owners of the utility to submit plans for reducing the property and income tax burden on customers if the utilities were not to change to municipal ownership.

The PSC notes that AWK serves customers in New York in many different areas, including the following counties:

The utility systems currently serve more than 120,000 customer connections in New York with a 2019 reported total Operating Revenue of more than $110,000,000.

Walden Environmental Engineering is active in this specialized area of utility engineering and consulting.  Walden has the experts, engineers, scientists and experience that can offer transition advisory services, utility valuations, feasibility studies, return on investment, break-even point and other related merger and acquisition support.  Walden has published a Guide for determining and maximizing the value of your utility assets and has succeeded in saving ratepayers money while getting better water quality and service.

If you are interested in growing your utility through acquisition, regionalization, additional services, outside investment or refinancing debt, give Walden a call to discuss your goals and how we can help.