Walden at the Forefront of Embracing Laser Scanning Technology on Projects 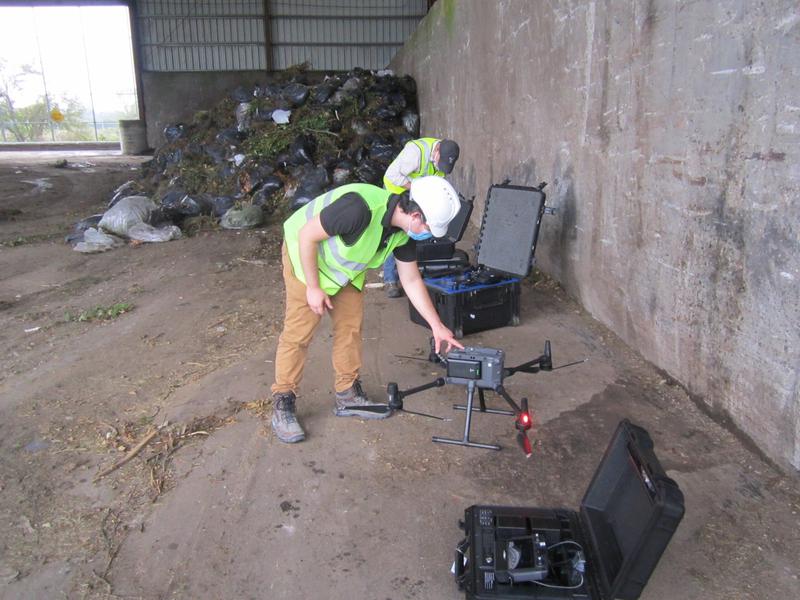 Walden Environmental Engineering continues to be a leader in supporting the research and development of new technology-based tools for engineering and construction professionals on their sites.

Working with partner Harkin Aerial–a leader in drone data collection, mapping, GIS, and reality capture–the firms performed a live demonstration of laser scanning technology at the Town of Hempstead’s Oceanside Sanitation facility. The demonstration was designed to test how quickly and efficiently a drone with a laser scanner, can be used in mapping and navigating indoor environments, in real time.

Interactive Tactical Group, a Boston-based laser scanning and reality capture services firm, supplied the drone and the laser scanner. The scanner uses LiDAR (light detection and ranging) technology to develop a 3-D map of an area. LiDAR is particularly useful in low-light settings or sites such as tunnels where a conventional drone cannot be used because of interference with traditional GPS equipment. It uses a pulse from a laser to gather measurements, which are then used to create detailed 3D images of objects.

The laser equipment, a Hovermap LiDAR system, incorporates SLAM (simultaneous localization and mapping) technology. SLAM was initially created for use in the development of autonomous robots and has been refined in the Hovermap platform to perform autonomous drone mapping in GPS-denied environments. The laser identifies features in real-time and communicates back to the drone so that the drone can move around the environment safely and autonomously. Coupled together, LiDAR and SLAM provide users with extremely precise measurements of any given environment.

SLAM LiDAR-equipped drones have benefits beyond the obvious precision gains. Because they are flown autonomously, they can capture measurements in dangerous environments that in the past would have required a highly skilled team to fly said drone, or workers physically moving around the site. Removing workers from high-risk environments, especially those associated with fall risk due to heights or prone to collapse, results in less accidents on work sites, making it easy to see how development of such technology may be able to answer the industry’s increasing demand for tools to help them work safer.

With coronavirus restrictions affecting organizations, using drones to augment operations can also help ease pressures brought on by not having enough people on sites to complete tasks and allows workers to remain at a safe distance from each other.

They also drastically reduce time that people must spend on sites to capture measurements. That could help organizations realize a cost savings in their operations. In fact, during the demonstration, Harkin was able to map an entire incinerator building in 25 minutes. Using traditional means, the work could have taken all day to complete.

Laser scanners do not require light to use, so they can be employed at night when the operation would be less likely to impact the day-to-day functions of any given organization.

Upon completion of the scan, the drone operator gathers the data and creates a 3D point cloud, which is a digital representation of the site. The point cloud data can then be easily translated into 2D drawings or used as-is.

Although drones and LiDAR are not new, combining them in this manner, and with SLAM is new. The combination of these tools has only been deployed commercially since 2018.

Walden, having worked with Harkin for a few years, is always eager to hear their recommendations regarding the use of advanced technology and this was no different.

The laser scanner can be used on or off the drone, increasing its flexibility and range of use, another key point in promoting the use of the technology. However, the most important selling point may be the myriad of uses for the equipment. The technology can be used in many environments where it is too risky to send people, or where traditional drones cannot function.

Because the simultaneous use of a drone, LiDAR, and SLAM are in its infancy; Walden is at the forefront of piloting new and exciting technology. Walden looks forward to testing and continuing its history of developing innovative solutions to answer today’s environmental challenges.