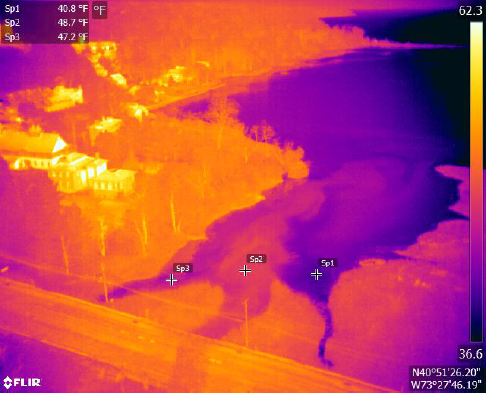 Recent developments in drone thermal imaging have proven to be especially effective at identifying water quality issues. Walden and Harkin have undertaken multiple case studies which show, under proper conditions, that many illicit discharges (sources of potential pollution) produce a measurable change in temperature that can be seen with a thermal drone. By flying in ideal conditions (usually nighttime or early morning), drones can cover large areas of land. By looking at hotspots that “light up” in a thermal image and comparing them with aerial images from visible light cameras, discharges can be pinpointed and logged. Since anomalies typically have the highest temperature difference at the point source of the discharge, a drone operator who is well versed in thermal imaging can “hunt down” issues – by methodically guiding the drone to the warmest apparent locations in a given scene. Just like drone mapping, all data is georeferenced. As the drone snaps a photo of a thermal anomaly, the GPS location is tagged so that the site can be investigated on foot as a follow-up action. This method is extremely useful for locations where water quality issues are known, but illicit discharge sources are difficult to pinpoint due to rough terrain, or an area too large to easily cover on foot.

In some conditions, it is possible to identify leaks in drinking water mains using drone thermal imaging, if the leak comes to the surface and creates a measurable temperature difference. It is especially useful to detect issues in areas or features where the main is not deeply buried, such as curb valve boxes. A leaking curb valve will change the temperature of the surrounding area, and this can be picked up easily on thermal. Shallow buried sanitary piping can also generate a thermal signature strong enough to show up on the surface pavement. If the signature is “clean,” i.e. it shows the straight pipe run and nothing else, it is a good indicator that there are no issues. If the thermal signature shows a more organic shape around the pipe, this is a good indicator that there may be a leak or similar issue requiring follow up action or repair.

Lastly, unexpected stormwater patterns can be tracked and traced from thermal photos after a rainfall event. In the imagery on the next page, traces of both expected and unexpected runoff can be seen from rainfall that had occurred overnight. Long after the visible traces are gone, runoff leaves behind “thermal fingerprints” that show both the runoff pattern and point source. In this scenario, it was determined that the roadway had insufficient drainage.