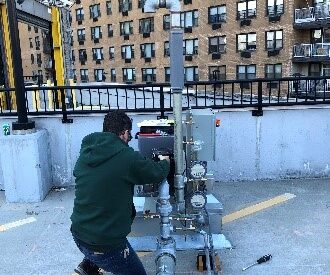 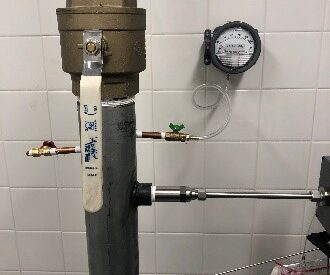 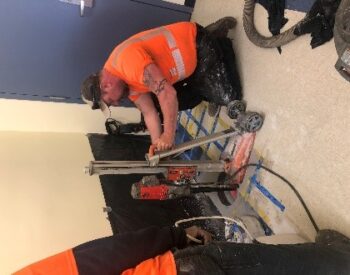 Walden provided engineering design and consulting services to a NYC-based real-estate developer and building management company in partnership with a local environmental services firm. The development firm is the owner of a commercial building with multiple store fronts located in Corona, Queens. One of the store fronts has been outfitted to house a pre-kindergarten center. Prior to occupancy, an indoor air quality test was performed. The test indicated that elevated concentrations of Volatile Organic Compounds (VOCs) were present, and that mitigation efforts would be required in the space, as well as in two additional storefronts in the building that are currently vacant. These requirements were set forth by the New York City School Construction Authority (NYCSCA).

Walden was brought on to the project by the developer’s primary consultant for its expertise in remedial system design so that the school space and the adjacent storefronts could be occupied and operate as intended. Walden determined that Sub Slab Depressurization Systems (SSDS) should be installed in the spaces. Since the school space was newly outfitted, the system for that space would need to be retroactively installed. The other two spaces would be equipped with SSDSs during the construction of the new tenant spaces to allow for the three SSDSs to work together.

Initially, a sub-slab pilot test was performed in the school space in order to size an appropriate blower that would be incorporated into the system. Once the design was coordinated with NYCSCA and completed, Walden assisted the client in managing the contractor bidding process. Following the selection of a contractor to install the first of the three systems, Walden reviewed and approved multiple submittals related to the system components and provided close oversight of the system installation. Once the system was installed, Walden inspected all aspects of the system, and performed a sub-slab pressure test in the presence of NYCSCA to ensure the system was operating successfully. The test indicated that a vacuum was present beneath the slab, and the SSDS installation was considered successful.