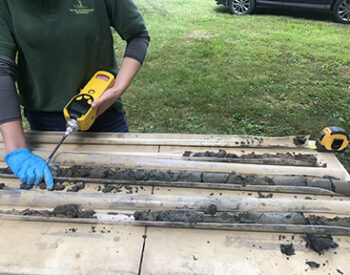 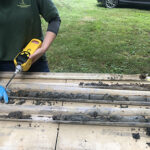 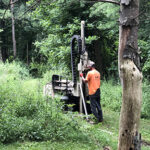 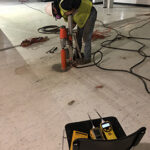 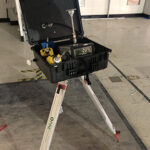 Walden has been assisting a real estate development company in its efforts to revitalize a previously under-utilized and largely vacant industrial complex in the Hudson Valley. This site is subject to a RCRA permit and is classified by the NYSDEC as an Inactive Hazardous Waste Disposal Site due to a groundwater contamination issue encountered in the 1980s. While the contamination is being treated by engineering controls, all site modifications that disturb the subsurface, including new developments or building retrofits, are subject to strict NYSDEC requirements and oversight.

Whenever the site cover system is breached or building modifications include disturbing soils beneath the building slabs, Walden performs pre-construction sampling to characterize the soils in order to identify exposure risks and to determine proper methods to handle and dispose of soils that will be removed during construction.  Walden also performs post-excavation soil stockpile sampling to verify that soil cleanup objectives and criteria are met for on-site reuse of fill. Recently, Walden successfully completed the characterization of two large undeveloped parcels located on the periphery of the facility to understand appropriate future uses for them based on their environmental quality. The work was completed over two weeks in thickly wooded areas with rugged terrain.

Additionally, Walden administers a Community Air Monitoring Program (CAMP) for each project during on-site intrusive activities to verify that air quality is not impacted by dust or volatile organic compounds (VOCs) released as a result of the work.  CAMP may be performed during characterization activities, excavations, or sub-slab work within the buildings. Walden directs the contractors to implement measures to mitigate the release of dust and VOCs when elevated concentrations are recorded during CAMP air monitoring to avoid exceeding the action levels and to maintain active construction. Such measures may include the use of fans, HEPA filters, or water misting. All planned projects are conveyed to the NYSDEC in the form of work plans. At the conclusion of the project, a report summarizing the work and all of the CAMP data is provided to the NYSDEC to ensure all work has been conducted in accordance with the approved work plan, and that human health has been protected.

As with any development project, timelines and budgets must be met through proper planning and efficiency. Walden’s team of engineers, geologists, and scientists carry out the required investigations and oversight required to comply with the RCRA permit and NYSDEC requirements while moving the various development projects along. Often, multiple concurrent projects take place at the site. Each project is specific to the requirements of the tenant, and therefore range in size and complexity. Walden is excited to be a part of the revitalization efforts taking place at the Site, which brings industry and jobs to the Hudson Valley.