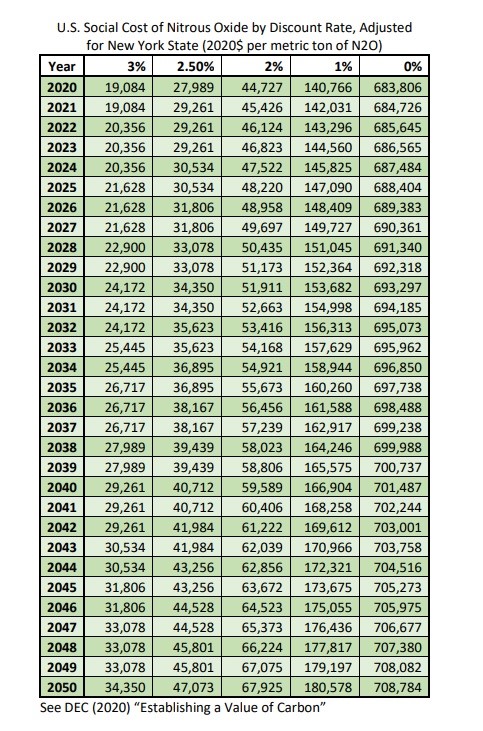 The New York State Department of Environmental Conservation (NYSDEC) has released a new draft “Value of Carbon” guidance which will be used to assist State entities with decision making by estimating the value of the greenhouse gas emissions reductions. Developed in accordance with the Climate Leadership and Community Protection Act (CLCPA) and in consultation with the New York State Energy Research and Development Authority (NYSERDA) and Resources for the Future, this new guidance will establish a cost value for avoided emissions of carbon dioxide, methane, and nitrous oxide; provide up-to-date reviews of new and different approaches used by other governments to place a value on emissions; and identify future areas of work, including placing a value on other greenhouse gases and air pollutants whose emissions may be limited by restrictions.

The proposed Value of Carbon guidance is a tool that can be used to consider greenhouse gas emissions and climate change in decision-making processes by the State. This guidance is only to be used as an aid and, unlike a regulation, it does not propose a carbon price, fee, or compliance obligation.

What is the Climate Leadership and Community Protection Act (CLCPA)?

The CLCPA is currently the most ambitious climate and clean energy legislation in the country. The CLCPA requires New York State to achieve a zero-emission electricity system by 2040 and reduce greenhouse gas emissions to 40 percent below 1990 levels by 2030 and 85 percent by 2050, creating a new standard for states to expedite the transition to a clean energy economy.

Walden first covered the CLCPA in the “Climate Change and Environmental Protections in NYS ” blog post shortly after the Climate Act was passed in 2019.  Focusing on renewable energy technologies to reduce the State’s carbon footprint is integral to the legislation. Achieving the goals of the Climate Act will benefit the environment by reducing greenhouse gas emissions, and at the same time create new opportunities for businesses and industries to spark economic development. Our “NYSDEC and NYSERDA Take Steps to Support Implementation of State’s Nation-Leading Climate” blog post focuses on the creation of the Just Transition Working Group and 6 Advisory Panels that will work alongside the council to help achieve the State’s goals put forward by the CLCPA.

The Draft Value of Carbon Guidance

The value of carbon is defined by a representation of cost applied to a unit of greenhouse gas emissions, typically in terms of dollars per ton of gas. This value can be useful for decision making as it gives a clear monetary value for the costs of emissions and the cost benefits that would occur if these emissions are avoided.

In the draft guidance, the CLCPA has outlined two approaches to establish the value of carbon. These include a cost of damages approach (also known as the social cost of carbon) that is based on an increase in emissions due to climate change, and the marginal abatement cost approach which sets a specific emissions target and seeks to find the cost to reduce emissions to that target. As well as providing recommended procedures for these approaches, it will also provide assistance to State agencies for applying the value of carbon where it’s appropriate without establishing any requirements for private or public entities.

The NYSDEC states that in decision-making contexts, particularly those that have a history of valuing carbon, the cost of damages approach may be more favorable and is recommending the use of the U.S. Interagency Working Group’s (IWG) damages-based value of carbon, also referred to as the social cost of carbon dioxide, methane, and nitrous oxide (see attached charts for federal IWG values in 2020 dollars per metric ton of emissions). It is specifically recommended that entities provide an assessment based on a range of discount rates from 1 to 3 percent which will represent the range of potential impacts to society with more specifically using only a central estimated value at the 2 or 2.5 percent discount rate. Shown in the attached charts, this translates into a 2020 value of carbon dioxide of $53-$421 per ton; a 2020 value of methane of $1,527-$6,578 per ton; and a value of nitrous oxide of $19,084-$140,766 per ton. This approach and values have been used by various jurisdictions as part of cost benefit analyses, rulemaking processes, environmental assessment, and to demonstrate the benefits of climate change policies.

Walden’s environmental professionals are experienced in innovative energy technologies and working alongside NYSERDA and NYSDEC. If your business or facility will be forced by these new regulations to reduce greenhouse gas emissions and you are looking to learn more about the Draft Value of Carbon Guidance, how to get ahead of the transition to clean energy or help with emission reduction, please contact Walden Environmental Engineering at 516-624-7200.