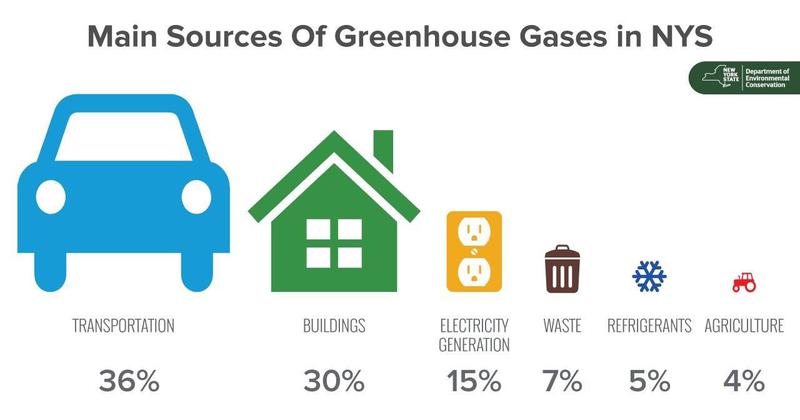 The New York State Department of Conservation (NYSDEC) and the New York State Energy Research and Development Authority (NYSERDA), whose leaders oversee the State’s Climate Action Council, recently appointed members to the newly created “Just Transition” Working Group as well as six (6) Advisory Panels that will work alongside the Council to implement changes intended to reach the State’s ambitious goals put forward by the Climate Leadership and Community Protection Act (CLCPA). With help from these groups, the NYSDEC has begun taking steps forward by creating new laws to reach these clean energy goals.

What is the Climate Leadership and Community Protection Act (CLCPA)?

The CLCPA, also known as the Climate Act, is currently the country’s most aggressive legislation passed to combat climate change, targeting energy consumption and greenhouse gas emissions.  The State’s goals detailed on its Climate Act website are outlined below.

Walden first covered the CLCPA in the “Climate Change and Environmental Protections in NYS” blog post shortly after the Climate Act was passed in 2019.  Focusing on renewable energy technologies to reduce the State’s carbon footprint is integral to the legislation.  Achieving the goals of the Climate Act will benefit the environment by reducing greenhouse gas emissions, and at the same time create new opportunities for businesses and industries to spark economic development.

Responsibilities of the Just Transition Working Group and the Advisory Panels

The Just Transition Working Group, which includes representatives from various labor organizations, impacted industries, renewable energy developers, and communities throughout the State, is tasked with acting in the best interest of all New Yorkers, including those living in disadvantaged areas.  The Climate Act calls for renewable energy projects that promote workforce training and development, new job opportunities, housing improvements, low-income energy assistance, and assessing different opportunities to put former power plant sites to more productive use.

The 6 Advisory Panels are responsible for evaluating alternatives and making recommendations to the Council in order to develop a comprehensive program to stimulate the economy, create jobs, and foster innovation, all while increasing community resilience State-wide to protect against climate change impacts.  The panels are made up of representatives from public, private, academic, environmental, and community groups that cover the following areas of the economy: Agriculture and Forestry; Energy Intensive and Trade-Exposed Industries; Housing and Energy Efficiency; Land Use and Local Government; Power Generation; and Transportation.

The NYSDEC, alongside these Climate Act advisory panels and committee members, has proposed new statewide greenhouse gas (GHG) emission limits under 6 NYCRR Part 496 that will reflect the values set forth in the CLCPA. To achieve the Climate Act’s requirements to reduce the emissions by 40 percent and 85 percent in 2030 and 2050, respectively, the NYSDEC is proposing new GHG emission limits of 240.83 million metric tons of carbon dioxide equivalent by 2030, with further reductions to 60.21 million metric tons in 2050. These proposed values account for emissions from in-state sources as well as out of state sources that are associated with New York state energy consumption. For example, the out of state greenhouse gas emissions include those associated with generating electricity which is imported into New York, and all emissions associated with extraction and transmission of fossil fuels into the State. The proposed rule is limited to establishing emission limits and does not impose non-compliance obligations.  The public comment period for the proposed Part 496 rule ends on October 27, 2020.

Walden’s environmental professionals are experienced in innovative renewable energy technologies and working alongside NYSERDA and NYSDEC. If your business or facility will face challenges in meeting the greenhouse gas emission regulations and you are looking to learn more about the proposed 6 NYCRR Part 496 rules, please contact Walden Engineering at 516-624-7200.  We can help you get started on the transition to clean energy and help reduce your GHG emissions.