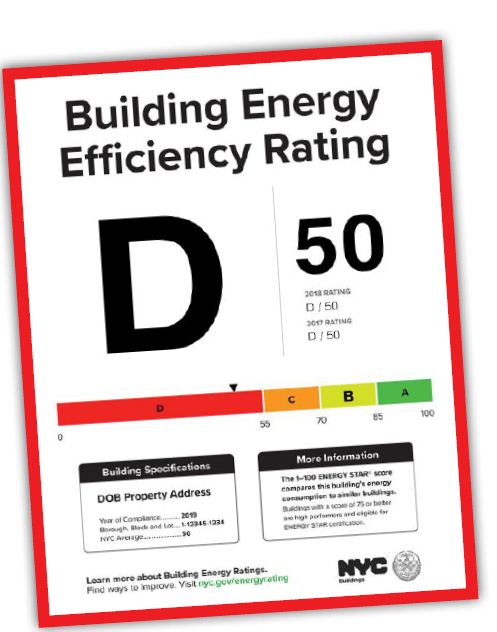 On October 1, 2021, New York City released new building efficiency grades for buildings over 25,000 square feet and multiple buildings on a single lot that total at least 100,000 square feet. Originally launched in 2020, New York City’s Energy Efficiency Letter Grade Signs Program was put in place to give New Yorkers a snapshot of a large building’s energy performance compared to similar buildings within the five boroughs. This initiative, which is part of the Climate Mobilization Act (CMA) legislation originally passed by New York City Council in April 2019, is an aggressive push by the City to increase energy efficiency and achieve a 40 percent decrease in greenhouse gas emissions by 2030. Overall, the CMA is being implemented in tandem with New York City Local Law 97, which sets forth a stringent deadline for large building owners to attain an 80 percent decrease in their greenhouse gas emissions by 2050. These energy reduction programs are in line with the carbon drawdown targets set out in the Paris Agreement, which would also see New York City reach its pledge of becoming a carbon-neutral city by 2050.

New York City assigns the building efficiency grades based on a numerical and alphabetical scale ranked by the U.S. Energy Star Score. If a building scores a 50, which is the median score, it would receive a “D” rating. A “D” rating would indicate that a building is less efficient than 50 percent of buildings rated nationwide. Although these ratings are currently being used to increase transparency, build public awareness of how efficient these buildings are, and provide a system to track improvements over time, New York City’s goal remains the same; to become carbon neutral by 2050.

Walden’s experienced environmental engineers and scientists can help you evaluate and implement building improvements to reduce energy usage and promote efficiency. If you’re a large building owner looking to retrofit your current building or looking to develop a property using green or renewable energy practices, please give Walden a call at (516) 624-7200.

(Spivack, 2020, The New Yorker, The Dakota Got a C: How 50 New York Buildings Scored on Their Energy-Efficiency Report Cards)